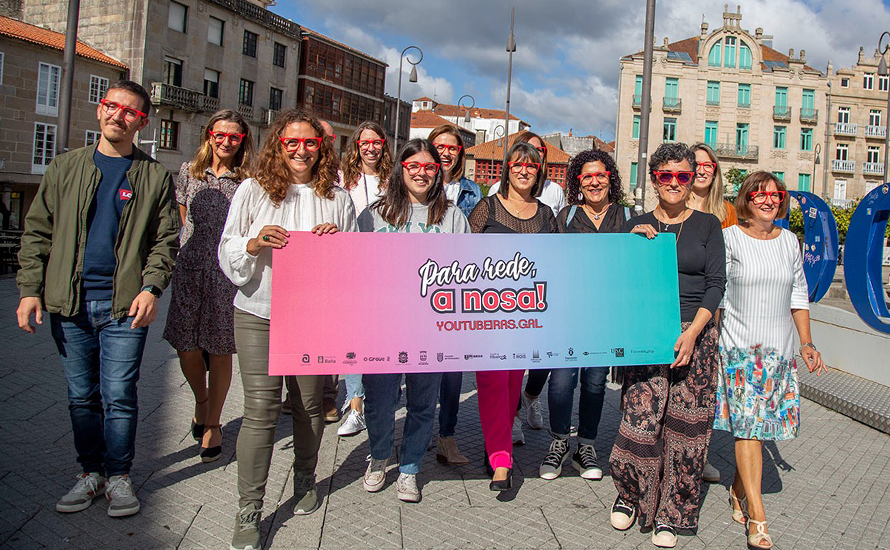 04/10/22
Youtubeiras.gal, boosting the use of Galician on the web

The main objective of the Youtubeiras project’s web address is to promote creation in Galician on Youtube with different themes and formats. It serves to give visibility to the project, to the people who generate content in Galician on the Net, to the contest, to training and to specific articles, among other things. It aims to be a place of reference in the search for digital content in Galician.

How did the project come about?

From a meeting of technical staff of linguistic standardization who were attending a summer course on linguistic dynamization that is regularly held in Carballo. The starting point was the detection of the lack of Galician-language content on Youtube; in the face of any query, it was almost always necessary to resort to videos in other languages.

Who is behind the awards?

It is a collaborative project that is promoted by twelve city councils from all over Galicia (A Baña, Ames, Carballo, O Grove, Moaña, Negreira, Pontevedra, Rianxo, Ribadeo, Rois, Santiago de Compostela and Teo), the Provincial Council of A Coruña and the three universities (UDC, USC and Uvigo). There are entities such as Ourense that were in other editions, but not in this one. To participate in this and other collaborative projects such as Enreguéifate, Apego and the Debate Club, among others, it is essential to have a language standardization service.

Can you tell us how the contest works?

Youtubeiras has a contest that distributes in this edition 7,500 € in prizes in the categories of youtubeiro/a, channel, video, youtubeiro/a revelation, linguistic quality, pioneer, network and public award. All will receive €1,000 except for the public prize, which will be €500. All people over 14 years of age with videos published after October 22, 2021 can register through the website youtubeiras.gal. The registration period is open from September 27 to November 25. After the jury’s resolution, the awards will be presented at a gala in which all the people nominated for the awards will participate and which is open to the general public.

How do you see the future of Galician in the networks?

We believe that the Youtubeiras project helped to increase the use of Galician on Youtube and other social networks and that at this moment there is already an important youtubeira community with a significant audience. You can even make money with a Galician account or get new job opportunities, but there is still a long way to go.

How healthy is our language online?

More and more people are using Galician to surf the Web. The Galician language already appears on websites, texts, voice, information, browsers, email accounts, social networks, search engines, content… It is important that this use continues to increase so that the platforms recognize our language on an equal footing with other languages.

Are there many Galician creators?

The Youtubeiras project proves that there is a pool of creators, as shown by the youtubeira community that is gathered in youtubeiras.gal. There are many creative people who have channels with a lot of repercussions on the Net and with many followers.

On the other hand, why did you choose a .gal domain for your website? What does the .gal domain offer you?

We chose a dot gal domain because it places us in the virtual world; a linguistic standardization project like Youtubeiras should take advantage of this type of resources to standardize its own domains as well.